Out there its a killing time – animals feeding furiously in any break in the rain, an atmosphere of desperation as adults feed their young. Except for a small happy flock, dipping into their imported food, with soy-rich pellets.

Six hens, laying an egg each day, scratching under trees in a garden at the foot of a lambing field. It is fenced in, to stop the hens scratching up new seedlings. Accidentally locked out of their coop yesterday – the crop of chickens’ eggs has disappeared. Who took them?

Rat? I’m not good at observing rats. If I am close to one – captured in the ‘humane trap’ – I can’t look him in the eye. We are about to drown him.

Badgers? who leave a trail of digging, rootling for worms – but they are held back the fence, electrified.

Crows? I begin to think it was crow, floppy winged, tightly patrolling the hill-side. 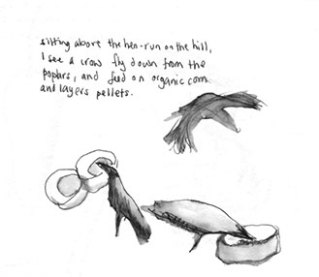 Later, sitting above the hen run on the hill, I see a crow fly down from the poplars, and feed on organic corn and layers pellets.

2 thoughts on “eggs, hens and crow”